"Will you still need me, will you still feed me when I’m 64?”   (Lennon–McCartney, 1967) Like so many other volunteers at Backdoor Theatre, Georganne and I found our lives enriched by the opportunities given us by our home theatre. The friends we made both on and off stage are precious to us. While Georganne already had her theatre degree from MSU, I learned almost everything I know about theatre at Backdoor.

When we weren't acting or working in the sound booth, we were in the audience enjoying productions with our friends. Years later, and miles away, the theatre and those friends still have a grip on our hearts. For years we've seen it struggle against the financial challenges that all theatres face. And the question keeps waiting in the wings: "Will Backdoor be here after we are gone? Will it live on?"

So we wanted to leave a legacy that might keep Backdoor alive and well at least until she is 64, as I recently was . So we had a big 64 party at Backdoor, and started the 64 Club Endowment Fund. What I really wanted for my birthday was to start a tradition of donating a multiple of your age, each birthday! Just turned 35? Donate $3.50, or $35, or $350 - whatever you can easily afford - to the 64 Club Endowment Fund. The beauty of it is that anybody can do this - even the kids participating in the Summer Youth Musical. 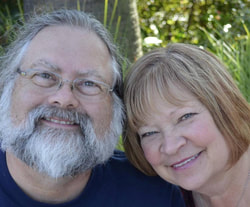 Georgeanne and William Payne
The original commitment to establish the Backdoor Theatre 64 Club Endowment is $6,400 cash, and will eventually be fully endowed through a bequest by William and Georganne Payne. The purpose of this fund is to establish an operating endowment for Backdoor Theatre so the theatre will be healthy and remain a vital part of the community for years to come!