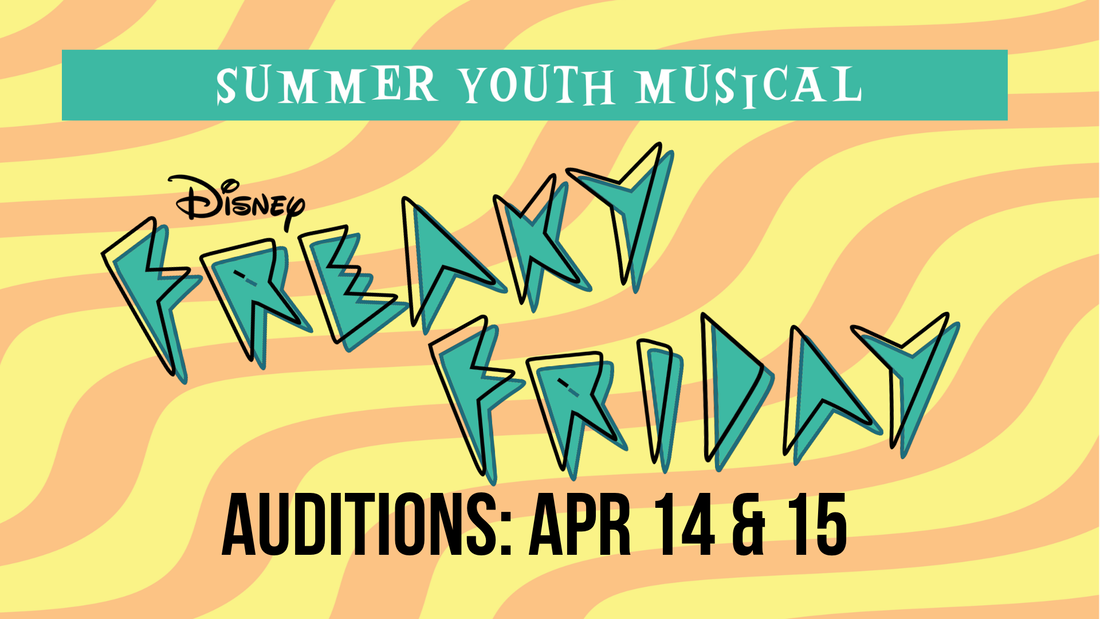 The vocal portion of the auditions will be cuts from the following songs - "Busted" (girls) and "Women and Sandwiches" (boys). Our SYM auditions are open to those 6th - 12th grade. ​

When an overworked mother and her teenage daughter magically swap bodies, they have just one day to put things right again. By spending a day in each other's shoes, Katherine and Ellie come to appreciate one another's struggles, learn self-acceptance, and realize the immeasurable love and mutual respect that bond a mother and daughter.

Freaky Friday, a new musical based on the celebrated novel by Mary Rodgers and the hit Disney films, is a heartfelt, comedic, and unexpectedly emotional update on an American classic. ​

*** Please note that these are just guidelines for casting the show. Some roles may be open to gender swapping.***

ELLIE BLAKE – Teenager, smart, funny, rumpled and a bit sloppy - uses humor and brash behavior to hide her sadness of having lost her father at an early age - resentful of her mother and her upcoming marriage.

KATHERINE BLAKE - Ellie’s young mother, decisive, smart, lovely, punctual - trying to keep her family and work life together as a single mom - in efforts to keep everything going well and be “perfect”.

LOUIS - Weddings Magazine photographer - seen it all, loves his job

ENSEMBLE - These performers will be on stage for much of the show. Some of them will also act as younger students at the high school as well as wedding guests catering staff, vendors, etc. Ensemble will comment on action and facilitate some of the transitions in scenes.

The role of FLETCHER BLAKE will be chosen from those students currently enrolled in our Elementary Theatre School class. This is at the directors discretion.

What is the overall audition process like?
The process is different for straight plays versus musicals and is dependent on who is directing the show. All auditions include an introduction to the director and committee members, and all participants fill out an audition form. Audition lengths can vary depending on the number of people who come. Familiarize yourself with the play/musical you are auditioning for before you come to the auditions.

What are Musical auditions like and how do you prepare?
Musical auditions are usually made up of three parts: choreography, vocals, and scene reading (reading from the script of the show). However, some musicals do not contain choreography so this section may be omitted from the audition process.
What are Straight Play auditions like and how do you prepare?
Straight play auditions consist of scene readings.  Occasionally, a play can demand a certain type of movement so there may be a portion of the evening in which the director will work with you to see how well you can move and adapt to the needs of the script.
Who casts the show?
A deliberative body called the casting committee. The committee is made up of the director, choreographer (if applicable), and guests who are experienced in theatre arts. The casting committee acts as a sounding board and another set of eyes and ears for the director who makes the final decisions.

How do you make your decisions on who to cast?
How do you find out why you were cast, or not cast, for the part you wanted?
Backdoor Theatre is a teaching theatre. We encourage all participants to reach out and ask this question. We will provide constructive feedback on how you can improve your skills. Please email us by using the form on this page.

Do you need to have experience to try out?
Not at all, we will teach you what you need to know. However, you are expected to be familiar with the show and material. Please email carter_wallace@sbcglobal.net to receive a script for the show. If you are trying out for a musical, familiarize yourself with the songs.

What do I wear?
Whatever your comfortable in and closed toe shoes. If your audition involves dancing, bring appropriate footwear and wear clothing you can move around in.

Do I need to come to both nights of auditions?
It's not required but encouraged.

What do I do if I don't get cast?
There are several reasons you might not get cast. Please reach out and ask for constructive feedback. Come to more auditions, and don't give up!  Being a part of a Backdoor production is an experience you will never forget!

Does Backdoor Theatre precast shows?
Some parts may be precast, this will be listed in character descriptions and that part will not be available during auditions.
Subscribe to our Facebook Events and get notified immediately about all of our events, including auditions and shows!