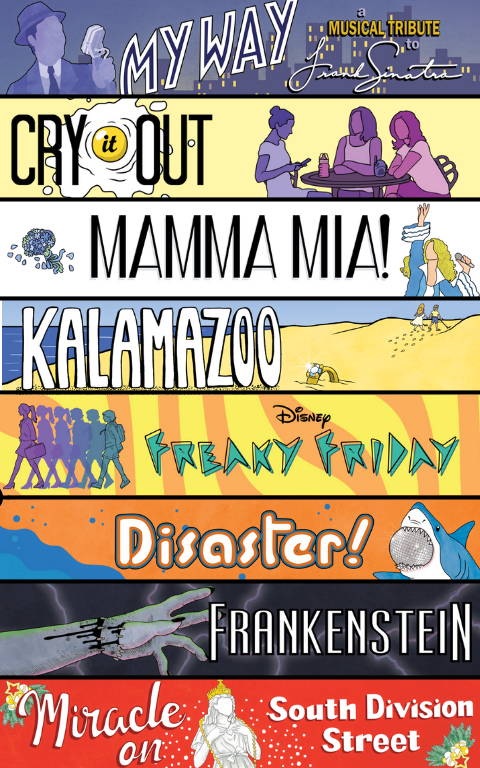 Main Stage
February 8 - 23
​
​My Way: A Musical Tribute to Frank Sinatra relives the legendary career and success story of of Frank Sinatra. With more than 50 hits, My Way is a celebration just as Ol' Blue Eyes would have wanted it - a few stories, a few drinks and plenty of knockout tunes.

Dinner Stage
March 22 - April 13
​
Cry It Out weaves together the challenges and triumphs of motherhood. This comedy takes an honest look at the absurdities of being home with a baby, the power of female friendship, the dilemma of going back to work, and the effect class has on parenthood in America.

​One daughter. Three possible dads. And a trip down the aisle you'll never forget! Over 60 million people worldwide have fallen in love with the characters, the story, and the music that makes Mamma Mia! the ultimate feel good show.

Dinner Stage
June 14 - 29
​
Peg and Irv, two quirky but endearing baby-boomers, bravely venture into the world of modern dating. When these opposites attract, they discover love isn't any easier the second time around. Kalamazoo is a romantic comedy about life's second act and learning you're never too old to be young.

​When an overworked mother and her teenage daughter magically swap bodies, they have just one day to put things right again.  Freaky Friday, a new musical based on the celebrated novel by Mary Rodgers and the hit Disney films, is a heartfelt, comedic, and unexpectedly emotional update on an American classic.

Dinner Stage
August 9 - 31
​
​What begins as a night of boogie fever quickly changes to panic as the hottest new floating disco-casino succumbs to multiple disasters including earthquakes, tidal waves and infernos. With larger-than-life characters and some of the most recognizable songs of the '70s, Disaster! will have you dancing in your seat!

​When Dr. Frankenstein’s experiment goes horribly awry, he resolves to destroy the terrifying creature he has unleashed upon the world. But can he kill his own creation without becoming a monster himself? This new adaptation full of shocking twists and turns is sure to keep you on the edge of your seat as it brings Frankenstein (and his monster) to life.

An entire family's faith is shaken to the core when a deathbed confession causes a family legend to unravel. The results are heartfelt and hilarious.
PURCHASE SEASON TICKETS